Half of adult Facebook users have never heard of its free Watch video service, according to research by US-based The Diffusion Group. 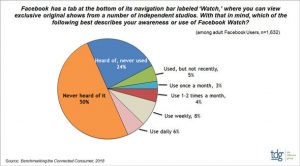 The survey of 1,632 adult Facebook users claimed that Facebook Watch “continues to face significant challenges regarding feature awareness and use.”

The research found that 50% of the polled Facebook users had never heard of Facebook Watch, while a further 24% had heard of it but never used it.

“Despite the slow build of Watch users, it would be remiss to underestimate Facebook’s long-term potential as a large-scale video provider,” said Michael Greeson, president of TDG.

“As we first noted in 2016, prominent social platforms like Facebook are looking for ways to exploit their massive scale to sell new video services to their users, much as Amazon has done with Prime.

“Watch is a small first step in that direction, as is the US$1 billion Facebook set aside in 2018 to fund original programming to populate the service.”

Facebook launched Watch, its platform for episodic programmes, in the US in August 2017, billing it as a platform for creators and publishers to “find an audience, build a community of passionate fans, and earn money for their work”.