Over-the-top revenues from TV episodes and movies in Easter Europe will more than triple from US$1.01 billion in 2017 to US$3.51 billion in 2023, according to Digital TV Research estimates. 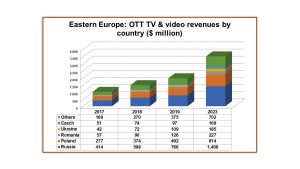 The research firm said that subscription video-on-demand was the region’s largest OTT revenue source in 2017 accounting for US$515 million or 51% of total OTT revenues. This is tipped to rise to US$2.25 billion, 64% of OTT revenues, in 2023.

The Eastern Europe OTT TV and Video Forecasts report claims there will be 22.1 million SVOD subscribers in the region by 2023, triple the 7.1 million recorded at the end of 2017. Russia is expected to generate five million and Poland nearly four million of these additional 15 million subscribers.

In terms of revenues, Russia is expected to overtake Poland this year to become the SVOD leader, with SVOD revenues in the country to reach US$766 million in 2023, accounting for 34% of the regional total.

Looking at the wider OTT market, Russia is expected to account for 40% of the region’s revenues by 2023, with Poland generating a further 23%.

“Foreign ownership restrictions on OTT platforms limit companies such as Netflix and Amazon Prime Video. Luckily for Russia there are plenty of home-grown platforms.”