The proportion of UK adults who watched on-demand video from commercial services like Netflix has risen from 29% in 2016 to 46% in 2018, according to the Office for National Statistics (ONS). 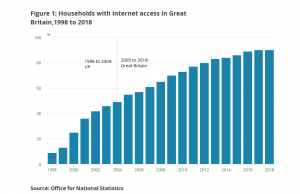 While the ONS said that the most popular online activity in 2018 is sending or receiving emails, with 84% of adults doing this, it noted the “large growth in the proportion of adults who watched videos online”.

“There were some differences in the activities that men and women carried out over the internet, with a higher percentage of women using it for social networking (69%), compared with men (60%),” said the report.

“However, the proportion of men who watched videos on YouTube or similar was 13 percentage points higher than women, at 69% and 56% respectively.”

The Office for National Statistics is the UK’s recognised national statistical institute and is its largest independent producer of official stats.