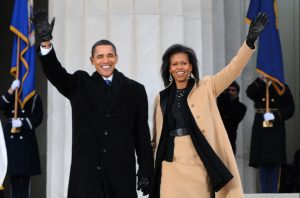 Former US President Barack Obama and his wife Michelle Obama have made the first hire for Higher Ground Productions, the entity through which they will produce content for Netflix.

Priya Swaminathan, a veteran entertainment executive, will work closely with the duo on new Hollywood projects, according to The Hollywood Reporter. It is not yet clear what her role will be.

Swaminathan is known for her documentaries and social activism. She is the former director of development at Annapurna Pictures.

The exec produced and co-directed Very Young Girls for Showtime in 2007. She has also worked for Jackass star Johnny Knoxville and his production outfit, Dickhouse Productions.

Swaminathan is a social activist and has been involved in the recent Time’s Up movement as well as Democratic politics in the US.

Netflix chief content officer Ted Sarandos said of the partnership: “Barack and Michelle Obama are uniquely positioned to discover and highlight stories of people who make a difference in their communities and strive to change the world for the better.”

The Obamas are just one case of Netflix signing mega-stars to its platform. They join the likes of Ryan Murphy and Shonda Rhimes, who have also signed with the platform for multi-million dollar deals.