Ofcom: risks of structural decline in TV industry appear to be growing

TV viewing in the UK has been falling since 2010 but saw a steeper decline in 2017, with the risks of structural decline in the industry appearing to be growing. 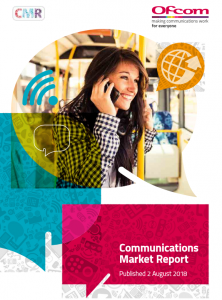 This was one of the findings of Ofcom’s Communications Market Report, a major study on how communications services are changing in the UK, which shines a light on how the take-up of faster broadband and connected TVs are changing how people watch programmes.

The report said that nine in ten people still watched broadcast TV every week in 2017, for an average of 3 hours 23 minutes a day. However, this figure was down nine minutes a day compared to the previous year, with the steepest fall to be found among children and young adults.

“These changes in viewing behaviour present major challenges to broadcasters. Television advertising revenues fell by 7% in real terms in 2017, and while this may be largely due to macro-economic factors, the risks of structural decline appear to be growing as viewing figures fall and online video advertising grows,” said Ofcom.

“There was also a decline in pay TV revenues in 2017, after many years of growth, indicating a challenging market for pay TV operators such as Sky and Virgin Media, which face competition from subscription on-demand services like Netflix and Amazon Prime.”

Ofcom said that total broadcaster revenue was down by 4% in 2017 to £13.6 billion, driven by a decline in ad revenue and the proportion of the licence fee attributed to TV. However broadcasters’ spend on TV content remained flat in 2017 at £7.5bn due to the cost of sports rights and production. 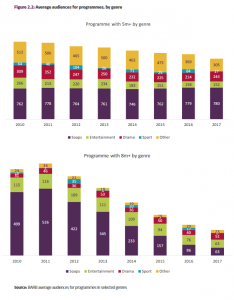 Looking at TV viewing trends, Ofcom said that TV shows with mass appeal are now “increasingly difficult to generate”. It claimed that programmes attracting audiences greater than 8 million have halved in the past three years.

“The days of programmes routinely attracting audiences of 10 million and over are all but gone, due to the rise of multi-channels on digital TV platforms in the 1990s,” said the report. “The programmes that now reach smaller, but still significant audiences of 5 million+ or 8 million+ illustrate the varying fortunes of entertainment on TV over the last few years.”

In terms of device use, smart TVs were detected in 42% of households in 2017, up from 5% in 2012, while smartphones have become the most popular internet-connected device with 78% of UK adults now using one.

The country’s “smartphone obsession” was a major theme of this year’s Media Nations report, with the average time spent online on a smartphone now 2 hours 28 minutes a day. This rises to 3 hours 14 minutes among 18-24s.

People in the UK now check their smartphones, on average, every 12 minutes of the waking day and 40% look at their phone within five minutes of waking up. Seventy-two per cent of adults said their smartphone is their most important device for accessing the internet.

“Over the last decade, people’s lives have been transformed by the rise of the smartphone, together with better access to the internet and new services,” said Ian Macrae, Ofcom’s director of Market Intelligence.