Spanish heist drama La Casa de Papel, which was originally shown on Antena 3 in its home market but is marketed internationally as Money Heist by Netflix, topped Parrot Analytics’ list of in-demand digital originals in France for the week ending July 1 with 4.2 million average demand expressions, placing it far ahead of second-placed The Handmaid’s Tale from Hulu, which is aired by Orange’s OCS service in the French market. 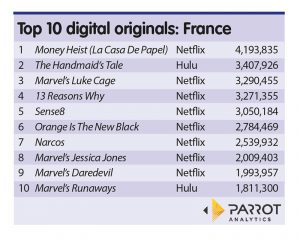 With the exception of The Handmaid’s Tale and Hulu’s Marvel’s Runaways, placed at number 10, Parrot’s top 10 list for France for the week from June 25-July 1 is dominated by Netflix.

The Handmaid’s Tale was positioned second after the Spanish series, with an average of 3.4 million demand expressions, followed by Marvel’s Luke Cage, with 2.3 million.

The remainder of the top 10 comprised 13 Reasons Why, Sense8, Orange is The New Black, Narcos, Marvel’s Jessica Jones and Marvel’s Daredevil.