The number of traditional US pay TV subscribers has fallen ten percentage points in four years, even though people are watching “more TV content than ever before” at 6.5 hours per day. 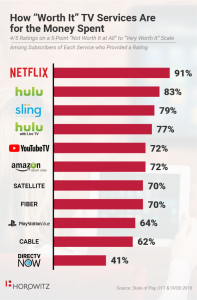 This is according to Horowitz Research, which said that 76% of TV content viewers reported subscribing to traditional cable, satellite, or telco pay TV service, down from 86% in 2014.

Some 70% of satellite and fibre subscribers and 62% of cable subscribers said that their service is worth it, while between 8% and 13% said their pay TV is not worth it.

By comparison, 91% of Netflix subscribers said that Netflix is worth the money and 83% said Hulu is worth it.

The survey asked how interested TV viewers would be in either switching or subscribing to a ‘skinny bundle’ service like this, with 48% of pay TV subscribers expressing an interest – rising to 58% among 18-34 year-olds. Nearly all of those interested in over-the-top pay TV services cited the lower cost as a key factor for this at 93%.

“The majority of subscribers to over-the-top services like Netflix, Hulu, and Amazon Prime are also multichannel subscribers; a smaller percent of them are cord-cutters and cord-nevers,” said Adriana Waterston, senior vice president of insights and strategy for Horowitz.

“The new dMVPDs do compete directly with traditional providers by offering linear television, including sports and local channels in many markets, DVR service, and other elements of traditional multichannel, but for a lower price and with the app-driven, consumer-friendly OTT experience that has transformed consumers’ expectations about how and where they can access their content.

“It is incumbent on traditional players to continue to assert their value proposition at the same time as they pivot their businesses to serve consumers’ evolving expectations.”