Parks: 40% of US homes own streaming media players

Almost 40% of US broadband households owned streaming media players at the beginning of 2018, according to Parks Associates. 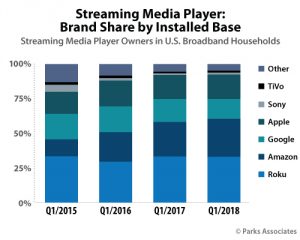 The research firm said that Roku maintained its lead in the market, holding a steady 37% of the market.

Amazon ranked second, increasing its share of the US streaming media player market by 4% since last year, taking some of Google’s share of the installed base.

“Since their inception about a decade ago, consumers have purchased streaming media players due to their modern and friendly user-interfaces, wide app support, and low cost, making them easier to upgrade and replace than a television set,” said Kristen Hanich, research analyst, Parks Associates.

“In terms of usability, consumers score Roku, Apple TV, and Amazon’s Fire TV highly. When ranking these devices, Roku leads in multiple usability categories, while the Apple TV leads in terms of gaming and the ability to purchase content.

“Amazon’s Fire TV has moved up to second place in the ease-of-setup category and is close to the Apple TV’s score in several more, including ease of finding something to watch and ease of purchasing content, which could account in part for its growing market share.”