Netflix to experience largest subscriber growth to date in 2018

Netflix will have its largest growth year to date in 2018, adding around 28 million subscribers over the year, according to predictions from Digital TV Research. 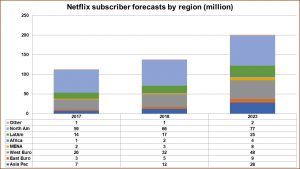 The Netflix Forecasts report estimates that Netflix will grow to around 139 million streaming subscribers this year and will continue to increase its global user-count over the next five years.

“These forecasts are a lot higher than the last edition of this report. Similar to many other analysts, we underestimated the fast take-up in international markets,” said Digital TV Research principal analyst, Simon Murray.

According to the report, as Netflix continues to grow its subscriber numbers its customer base will be less concentrated in its largest markets.

North America and Western Europe are expected to supply a combined 62% of Netflix’s total subscriber base by 2023 – down from 76% in 2017.

Asia Pacific meanwhile is expected to quadruple its 2017 subscriber figure by 2023, accounting for 28 million subs and 14% of Netflix’s subscriber number by this date.