A lack of local content has dampened the uptake of subscription video-on-demand services in France by comparison with other major markets, according to Ampere Analysis. 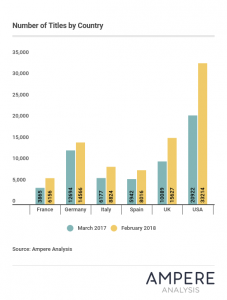 According to the analyst group, French SVOD services as a whole have less content than SVOD players in Germany, Italy, Spain, the UK and the US, and far lower levels of localisation on offer to subscribers. However, the situation has shown improvement over the past 12 months, and as a result, Ampere expects the number of SVOD subscribers in France to accelerate this year.

France also has a higher proportion of US content on its platforms, and the lowest number of locally produced shows measured by the number of hours available.

Analysing the top 500 titles in each market, Ampere found that France had on average the lowest rated content. Outside the top 500, French catalogues offered less niche content and the quality of the overall catalogue content was of a higher quality than other markets.

On the upside, Ampere found that France had experienced the largest percentage growth in number of titles, with an increase of nearly 60% in the last 12 months.

Ampere found that Amazon Prime in particular had a smaller catalogue in France than it had in other territories with the exception of Spain. The size of Netflix’s catalogue, by contrast, was broadly consistent across markets.

“Significant progress is being made in the French SVOD marketplace, and operators are set to improve more in 2018 to meet the expectations of subscribers in terms of better choice and quality of content,” said Hamish McGregor, analyst at Ampere Analysis.

“Further investment by Amazon could make a marked difference to the appeal of SVOD by increasing the amount of content available. Local operators can also differentiate by reducing their dependence on American content by adding “Made in France” content and exclusive titles. There is room for both local and global platforms in this market, and we expect to see subscriber numbers increase throughout 2018 as higher quality and more relevant content becomes available to French audiences.”