WARC: TV ad revenue in the UK to rebound this year

TV adverting revenue is expected to rebound this year after dropping in 2017, in part due to the Russia World Cup this summer. 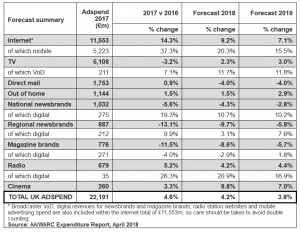 Total UK ad spend grew for its eighth consecutive year in 2017, climbing 4.6% to reach £22.2 billion, according to the Advertising Association and WARC.

“Mobile continues to underpin growth – over 90% of additional mobile investment was directed towards search and social media in 2017 – yet there was vitality across the wider industry.”

“Radio and cinema both recorded their fourth successive year of rising spend, while the out of home market expanded for the eighth year running. Further, we believe TV’s dip, caused mostly by reduced spending within the consumable goods category, is anomalous, and expect the channel to rebound this year thanks in part to the summer’s World Cup.”