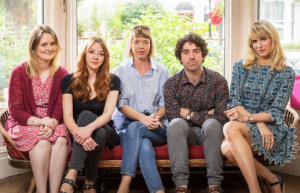 The series, written and created by Horgan, Holly Walsh, and Graham and Helen Linehan, will make its exclusive US debut with the first two episodes premiering on the service on May 10.

Motherland follows Julia (Anna Maxwell Martin), who always wanted her kids to be brought up like she was — by her mother. But instead her mom has abandoned her, so now she is thrown head first into the mother role where it’s sink or swim.

The deal was negotiated on behalf of Sundance Now by VP of acquisitions and co-productions Aurelie de Troyer, and on behalf of Lionsgate by VP of global SVOD sales Chase Brisbin.

Lionsgate owns the worldwide rights to the half-hour comedy.

“We are thrilled to partner with Lionsgate to premiere Motherland, a hilariously honest and relatable portrayal of the hyper-competitive world of modern parenting, exclusively on Sundance Now following its successful first season on the BBC,” said Jan Diedrichsen, GM of SundanceTV and Sundance Now.

“The series is sharply written and features a great ensemble cast.”