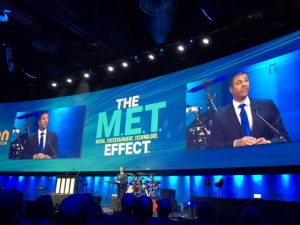 The FCC has embarked on a deregulation drive to “unshackle broadcasters” from “regulations that no longer make sense” and open the way to further free market competition, according to chairman Ajit Pai, who addressed the NAB Show’s We Are Broadcasters Celebration awards event in Las Vegas on Tuesday.

Pai said that “broadcast journalism drives meaningful change” and it was the FCC’s job to enable broadcasters by “modernising media rules”. He identified four areas where the regulator had successfully sought to remove or modify what he described as outdated rules over the past year.

He said that the FCC believed broadcasters should be enabled to innovate, and had thus approved the voluntary use of ATSC 3.0. Pai condemned resistance to this decision on the grounds that ATSC 3.0 should not leave behind viewers, which he said was “a shameful attempt to block progress”.

Pai said the FCC had approved a “long overdue” update to media ownership rules, including removing restrictions on cross-ownership of newspapers and broadcast stations.

He said that the FCC had also scrapped the ‘main studio’ rule dating from the pre-war era, allowing broadcasters to add news services and other offerings without undue burdens.

Pai said that the FCC had also launched a comprehensive review of media regulations. Children’s television rules would soon be updated to reflect the way children actually consume media in today’s world.

Pai further underlined his FCC’s support for broadcasters by promising further support for their post-spectrum auction transition to new frequencies, which he said was already underway. He said that “broadcasters should not be out of pocket to move” and that he had therefore worked to secure US$1 billion in funding for relocation costs.