eMarketer: social ad spend in the UK to exceed TV by 2020

Social networks’ share of advertising spend in the UK will overtake television ad spend by 2020, according to stats published by eMarketer. 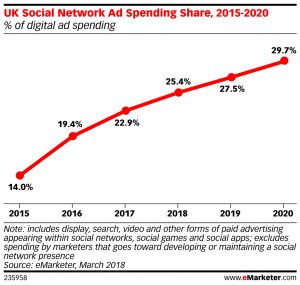 The research firm said that come 2020, social network ad spending will account for 20% of all media ad spend in the UK, compared to 17.8% for broadcast TV.

As it stands today, social networks’ share of ad spending has overtaken all traditional media formats in the UK, with the exception of TV, and is expected to grow throughout the year.

eMarketer estimates that marketers in the UK will spend £3.3 billion on social network advertising in 2018, a 24% increase over 2017.

It has also increased its social ad projections since its previous forecast due to diversification in the marketplace, which it says is driving up overall social network user rates and resulting in increased spend.

“While Facebook has been losing teen users, Snapchat has been adding them,” said Bill Fisher, eMarketer’s UK senior analyst.

“The result is a growing social media market, and one that advertisers are keen to utilise. Media-rich targeting options, with video a particularly big play, make platforms like Snapchat and Instagram especially attractive.”