Content discovery habits differ significantly between consumers in Germany and Spain, according to an analysis of demand trends in both markets by Parrot Analytics. 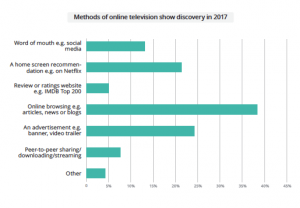 According to findings from Parrot’s Global Television Demand Trends report, the most popular online means of discovering content in Germany include online browsing of articles, news and blogs, used by 38% of users, of which 60% are over 45. Home screen recommendations on the likes of Netflix and online ads are also popular. However word of mouth recommendations via social media are used only by a minority of consumers.

According to Parrot Analytics, consumers in Germany also typically use traditional TV listings and guides to discover new content, with 35% relying on these. Listings and guides are particularly popular among older viewers. Other offline means of discovering content that are popular include TV commercials and word of mouth recommendations.

‘Total share of demand’ for digital content in Germany was dominated by Netflix, which accounted for 72% of demand expressions compared with 14% for Amazon Video and 9% for Facebook.

Content from CBS All Access – specifically Star Trek: Discovery – Hulu and Crackle also make these services register in Parrot’s analysis of the German market, despite non of these services being available. 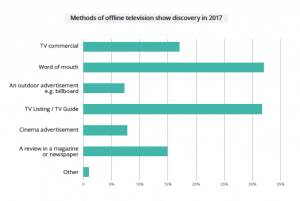 German content discovery habits online contrast sharply with those in Spain, where word of mouth via social media is the most popular method of discovering content, used by 37%. This reflects an event split between genders and people over and under the age of 45.

Other online methods of discovering content that are popular include online browsing and advertising.

Word of mouth discovery also features significantly in offline means of discovering content. Both word of mouth and TV listings and guides are used by about a third of consumers, putting these methods ahead of others including commercials, which comes third. Newspaper and magazine reviews are more widely used than in Germany.

Netflix’s content is even more dominant in Parrot’s ‘in-demand’ analysis of Spanish digital content distributors than is the case in Germany. Netflix scored 88% of demand expressions in Spain last year, putting it far ahead of second-placed Amazon Video with 7%.