Virgin Media to roll out 350Mbps broadband this spring

Virgin Media is due to start rolling out high speed 350Mbps broadband in the UK this spring. 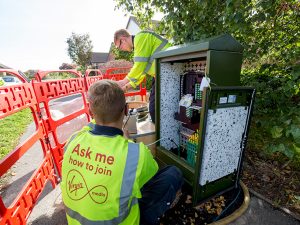 The Liberty Global-owned service provider currently offers speeds of up to 300 Mbps and claims its top internet speeds have increased 15-fold over the past decade.

“For busy households who want to watch HD TV on services like Netflix or BBC iPlayer, download music and play online games all at the same time, our speed increase is great news,” said Anthony Vollmer, Virgin Media’s executive director for connectivity.

“Our fastest ever 350Mpbs connection will give data-hungry families some added oomph and keep them living at lightning speed.”

Virgin Media said and that almost 15 million premises are now able to access its gigabit-capable network in the UK and Ireland thanks to its Project Lightning broadband rollout.

The company claims that 70% of its customers currently take speeds of 100Mbps or more.

The news comes in the same week that UK residential gigabit broadband provider, Hyperoptic, carried out a 10Gb home broadband test at East Village, the site of the London 2012 Athletes’ Village.

Hyperoptic said the demonstrated speed was some 276-times faster than the average consumer internet speed in the UK, and was the first time 10Gb internet has been brought to a UK home using an existing ISP network, not a new, dedicated line.

The trial was carried out with Get Living, which owns and manage 1,500 homes for rent at East Village, and relied on Hyperoptic’s full fibre technology that goes all the way into the customer’s home.

“We have carried out this trial to elevate the debate in a largely stagnate industry. While the market incumbents focus on sweating their copper assets and lobbying the likes of the ASA to convince them that its acceptable to market their fibre-to-the-cabinet services as ‘fibre,’ we are proudly setting a new standard,” said Dana Tobak, CEO, Hyperoptic.