More than 58% of video plays globally occurred on mobile devices in the third quarter of 2017, with that figure due to rise to 60% in mid-2018, according to Ooyala. 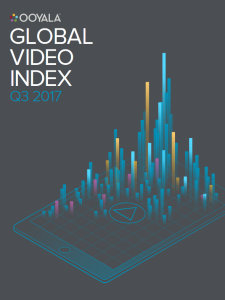 The video technology company’s Q3 2017 Global Video Index recorded a sixth consecutive quarter in which mobile devices accounted for more than 50% of all online video starts, with mobile views up 11.9% year-on-year.

The study said that long-form video viewing grew nearly 77% on smartphones and 70% on tablets in the quarter, compared to Q3 2016. At same time medium-length video consumption continued to decline.

“Not surprisingly, mobile continues to be the major driver of online video, popular across all age groups and all content types, and sports are leading the way,” said Ooyala principal analyst Jim O’Neill.

In the Europe, Middle East and Africa region, mobile represented 56% of all video plays in Q3, up 15% compared to the previous quarter.

In North America the figure was 54%, in Latin America it was 57, while in Asia Pacific 64.4% of all video plays were on mobile devices – the highest in the world and up 24% year-on-year.

Ooyala also noted that “more consumers are gravitating to mobile devices for viewing sporting events”, with mobile accounting for nearly 63% of all Q3 sports video plays and 18-49 year-old men tending to be the largest adopters of online video via smartphones.

“Content providers, operators and brands all need to focus on how best to leverage the increasing adoption of all things mobile or risk being an also-ran in the race for content dominance,” said O’Neill.