Netflix’s Stranger Things was far and away the most ‘in-demand’ digital original in Denmark in the week to December 5, according to Parrot Analytics’ latest data on the market. 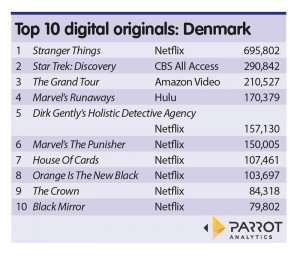 Stranger Things, which has topped the list in markets including the UAE, South Africa and Hungary in recent months, garnered close to 696,000 in-demand expressions in the small Danish market, placing it far ahead of second-placed Star Trek: Discovery with 291,000. The sci-fi original is distributed by CBS All Access in the US but by Netflix internationally.

The number three slot on the Danish list was taken by Amazon’s The Grand Tour. Other titles on the list include, at number four, Marvel’s Runaways – aired on Hulu in the US – and Netflix titles Dirk Gently’s Holistic Detective Agency, Marvel’s The Punisher, House of Cards, Orange is the New Black, The Crown, season two of which launches this week, and Black Mirror.