Live viewing on the TV remains “an important part of children’s lives”, with the TV still used by more children than any other device for watching content, according to Ofcom. 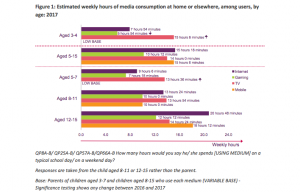 The UK broadcast regulator’s ‘Children and Parents: Media Use and Attitudes Report’ claims that For younger children, watching TV on the TV set makes up the largest proportion of their media time.

However, for the older children, Ofcom said the picture is “more mixed”.

While 12-15 year-olds who watch TV on a TV set spend nearly 14 and a half hours a week doing so – a similar figure to younger children – for them it is part of their “larger overall media consumption”.

Children aged 12-15 were found to spend more hours online and using their mobiles in a typical week than watching on a TV set. They were also most likely to not watch on a TV set at all.

“Around one in ten 12-15s say that they don’t watch any television on a TV set, higher than last year, while the number who say this is the device they mostly use to watch TV has decreased since last year to around six in ten,” said Ofcom.

YouTube was cited as an “important factor” in the changing landscape of content consumption, with half of 3-4 year-olds and more than 80% of 5-15s now using the video service.

“It is the most recognised content brand among 12-15s, and the one they are most likely to think includes their age group in its target audience,” said Ofcom.

“It is the one they would turn to first for all types of content they say is important to them, and the one they say they would miss the most if it was taken away. More 8-11s and 12-15s also say they prefer watching content on YouTube than TV programmes on the TV set.”

The full ‘Children and Parents: Media Use and Attitudes Report’ can be accessed here