The stark cost of illegal downloading and streaming of movies and TV shows had been laid bare – a whopping US$51.6 billion (€44.5 billion). 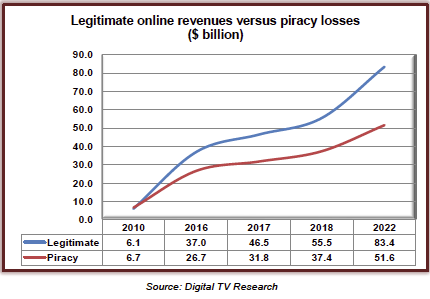 A report from industry analysis Digital TV Research suggests the amount of revenue lost to piracy has skyrocketed from US$6.7 billion in 2010 to nearly US$31.8 billion last year. The figure will hit nearly US$52 billion in 2022, the Online TV Piract Forecasts report suggests.

Digital TV Research’s stats do not include sports or pay TV, making the numbers all the more shocking.

A significant uptake in the number of people with Kodi boxes, which make illegal downloading and streaming easier, is evidently a part of the reason for explosion, with the amount of content being produced in television surely another.

On a more positive note, actions taken by Chinese authorities will see legitimate revenues versus piracy switch from a US$1.2 billion deficit in 2016 to a surplus of US$2.4 billion in five years’ time.

By 2018, Asia Pacific will have overtaken North America as the largest region for online piracy, with its losses nearly doubling between 2016 and 2022, ending on nearly US$20 billion.

The spread of piracy is not restricted to the region, however. The top five territories in 2016 in terms of losses (see graph) represented 63% of the total, but this will fall to just 55% in 2022. Moreover, eight territories will record losses of more than US$1 billion, double the figure last year.

Digital TV Research suggests emerging economies such as India and Brazil will be among the most damaged by piracy in the next five years, with the former seeing its US$700 million losses in 2016 grow to US$3.1 billion. Brazil will add another US$1.1 billion in losses over the same period.

Simon Murray, principal analyst at Digital TV Research, was positive about the future of content revenue protection, despite the predictions

“Piracy will never be eradicated,” he said. “However, it is not all bad news. Piracy growth rates will decelerate as more effective government action is taken and as the benefits of legal choices become more apparent.”

“Legitimate revenues from OTT TV episodes and movie overtook online piracy losses as far back as 2013. The gap between the two measures is widening.”