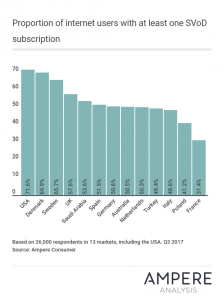 Almost three quarters of internet users in the US have at least one SVOD subscription, according to new research by Ampere Analysis.

The company said that 71.6% of internet users in the US have one or more subscription to a service like Netflix or Amazon Prime Video – the highest proportion across the 13 countries covered by the research.

Overall, at least half of web users in nine of the 13 countries have a minimum of one SVOD subscription.

The research is based on answers provided in the third quarter of 2017 from 26,000 respondents in 13 markets – which also included Australia, the Netherlands, Turkey, Italy, Poland and France.