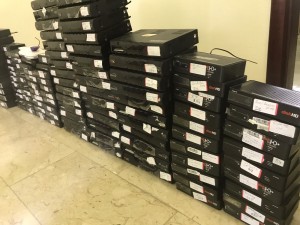 Middle East pay TV provider OSN has welcomed the arrest of three individuals alleged to be behind a large-scale illegal cable operation in Kuwait.

According to Kuwait’s Criminal Investigation Department (CID), three Indian men have been arrested after successful raids in a residential area of Salmiya, where they had been operating a sophisticated illegal cable network.

Detectives found dozens of illegal Dish TV India satellite set-top-boxes as well as Pirated OSN hardware that were being used to illegally distribute content to 10,000 subscribers over a 15-kilometre area.

The discovery of the illegal cable network followed a six-month investigation by the police after OSN’s dedicated Content Protection team filed a complaint with the Kuwait Ministry of Interior, CID and Ministry of Communications.

Kuwait CID estimate those operating the illegal network were earning approximately KWD70,000 (€197,000) per month from their services.

OSN chief legal officer, Sophie Moloney, said: “I congratulate the Kuwaiti authorities for this successful operation against content piracy. We are very grateful they have put a stop to this huge illegal cable network, that was costing us millions of dollars in lost revenue.”