New SVOD movies service for France to launch next month 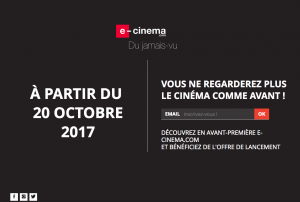 The service, created by Altantis Télévision CEO Frédéric Houzelle, online entrepreneur Roland Coutas and Bruno Barde, details of which were unveiled at the Deauville American film festival directed by Barde, is intended as a “complement” to theatrical moviegoing, according to the venture’s backers.

The platform will make a new film available each Friday at 14:00, adding to a small existing catalogue of about 20 titles that have never been released in France. E-cinema.com intends to differentiate its offering from rivals with more extensive catalogues by a strong emphasis on editorial choice, focusing on independent films that typically will air primarily on the festival circuit. Films will be made available in their French version without advertising.

By focusing exclusively on movies not released theatrically in France, e-cinema.com will avoid the country’s strict windowing rules that prevent movies from being made available on SVOD platforms for three years after their cinema showing.

The venture’s backers also envisage investing in original French movies in the 2019 timeframe, with budgets of between €1.5 million and €2.5 million.

A weekly half-hour magazine will air on the platform, presented by journalist Audrey Pulvar.