An agreement between Mediaset and Telecom Italia (TIM) to combine the former’s content with the latter’s distribution network and customer base is “desirable” provided Italy retains influence over development, according to the country’s undersecretary of state for telecommunications, Antonello Giacomelli. 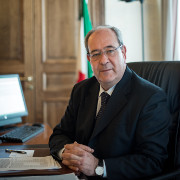 Interviewed by La Stampa newspaper, Giacomelli said that “an industrial agreement” between the pair that allows both to grow is “desirable” but that any collaboration between French media giant Vivendi, TIM’s largest shareholder, and Mediaset should not be one-sided in favour of the French group.

Giacomelli told La Stampa that it was important to avoid leaving the cultural field entirely to the likes of Sky owner 21st Century Fox and Netflix, and that to achieve this European companies needed to collaborate across borders. However, he said, such an agreement should not involve Italy giving up control to France.

The possibility of a deal between Mediaset and TIM has been touted in Italy recently as a possible alternative to the aborted agreement between Mediaset and Vivendi that would have seen the latter take control of Mediaset’s pay TV unit, Mediaset Premium. The Italian broadcaster and the French media giant are still engaged in a long-running legal battle over the cancellation of the deal by Vivendi and the alleged subsequent financial impact on Mediaset.

Vivendi is separately engaged in a battle to convince Italy’s markets regulator CONSOB and the Italian government that it does not “control” Telecom Italia, potentially triggering government intervention, but that the pair are merely “coordinating” on specific issues of strategic importance.

These areas include the creation of a possible move by TIM and Vivendi’s French pay TV unit Canal+ to create a new pay TV joint venture in Italy as an alternative to the abandoned Vivendi-Mediaset partnership – seen by some observers as a way to force Mediaset to the negotiating table.