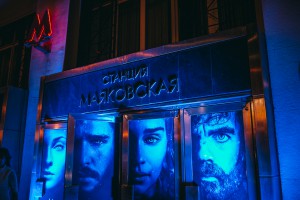 Series 7 of HBO’s flagship series Game of Thrones has now been released globally, with Amediateka, the series’ distributor in Russia, organising a special screening of the first episode at the Mayakovskaya station on the Moscow metro this morning.

Organized jointly by the Amediateka SVOD service and the Moscow Metro, 350 invited guests, including VIPs and Game of Thrones fans, gathered under the domed arches of the Mayakovskaya metro station to watch the opening episode.

Amediateka will be releasing each new episode of Series 7 at the same time as the rest of the world – every Monday at 4 am in Moscow– with a viewer option of Russian dubbing or the original English with Russian subtitles.

“Game of Thrones is a cultural phenomenon across Russia,” said Denis Gorshkov, CEO at Amedia TV. “We are very happy that the Moscow Metro supported our idea and invited us to hold the opening night in this amazing location – it must be the first time Game of Thrones has debuted deep underground.”

The new season debut did not go smoothly everywhere. Subscribers to Orange’s OCS service in France were reportedly hit by technical problems, with the site plagued by bugs making it impossible for new subscribers to create an account, while existing viewers were unable to access subtitles.

In Germany meanwhile, a promotional campaign by pay TV operator Sky to use the launch to sign up new subscribers reportedly resulted in delays caused by strong demand, with prospective viewers waiting for extended periods before receiving confirmation emails.