Dave and Home to launch on Freesat 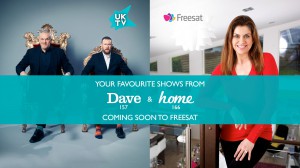 The launches will bring Dave content including Taskmaster, Dave Gorman Modern Life is Goodish, Alan Davies: As Yet Untitled, Crackanory, Red Dwarf XI and Dara O’Briain’s Go 8 Bit to Freesat viewers, while the launch of Home will give satellite viewers access to shows including My Flat-Pack Home, Nick Knowles’ Original Features, Make My Home Bigger, Extreme Makeover: Home Edition, DIY SOS, Escape to the Country, The Hotel Inspector and A Place in the Sun: Home or Away.

Alistair Thom, managing director at Freesat said: “We are thrilled that these two iconic and hugely popular channels are coming to Freesat, where they will be available to watch for free.  Freesat is dedicated to giving our two million homes the most compelling content and Dave and Home are spilling over with both new and established shows that people love.”

Simon Michaelides, chief commercial officer at UKTV, said: “We’re delighted to be launching Dave and Home on Freesat. With original programmes such as Taskmaster and Dara O Briain’s Go 8 Bit, Dave is one of the nation’s most watched non-public service channels and Home has grown by over 20% year on year thanks to shows such as Ground Force and Escape to the Country. Launching on Freesat means UKTV will be entertaining more viewers than ever before.”