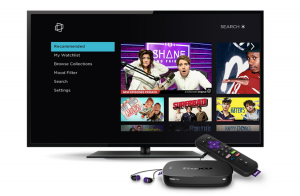 Roku has reached 15 million monthly active accounts globally, growing its user base 43% year-on-year as of June 30, 2017, according to company stats.

Roku said that users streamed nearly seven billion hours of content on the Roku platform in the first half of 2017, growing 61% over the same period of the prior year.

“Roku is the number one TV streaming platform in the United States as measured by total hours streamed,” said Roku founder and CEO Anthony Wood. “We are growing our active accounts by distributing our proprietary TV OS across a broad range of streaming devices with multiple price points and many new and highly rated Roku TV models from our TV brand partners.”

Roku said it now offers 5,000 streaming channels with access to 500,000 movies and TV episodes in the US, while Roku streaming devices are available to buy in the US, Canada, Mexico, the UK, Ireland and France.

Roku announced in February that it had 13.4 million active account holders and that in 2016 some nine billion hours of content had been streamed – one billion of which was in December.