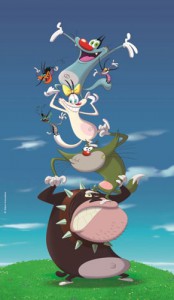 Lagardère Active has launched a new kids channel for the Arabic-speaking world.

Gulli Bil Arabi will be carried by the My-HD platform the Middle East and North Africa, giving it distribution in 18 countries across the region. The channel will be available as part of all of My-HD’s offerings.

The channel will have a programming line-up adapted to the way of life and school hours in its target markets, according to Lagardère Actgive. Gulli Bil Arabi will feature themed blocks covering the likes of pre-school content, adventure and programmes targeted at girls.

Titles available on the channel will include My Little Pony, Transformers, Oggy et les Cafards, Totally Spies and Power Rangers.

Gulli Bil Arabi will also include shows acquired specifically for the channel, including Slugterra, Bali, Marsupilami and Sam le Pompier.

The launch of the channel takes Lagardère’s total number of international channels to 16, with localised versions of Gulli Girl and TiJi in Russia and nine eastern European countries and Gulli Africa, available in 22 Francophone African counties.

“With the launch of Gulli Bil Arabi we are strengthening our presence in the North Africa and Middle East region, where Mezzo Live HD is already distributed, with a offer specifically for the region’s kids. Gulli Bil Arabi embodies the values of the Gulli brand – tolerance, openness of spirit and good humour – and is aimed at all kids from Rabat to Muscat, with a rich and varied offer of programmes designed to make them laugh, discover, learn and be amazed. We also wish, with this channel, to contribute to promote the quality and diversity of French animation, which will have a substantial presence in the line-up,” said Caroline Cochaux, depute director of TV at Lagardère Active.

“We thank My-HD for its support and we hope, thanks to this new channel, to accompany the operator as it develops, enriching its kids offering with a customised channel, the offspring of a powerful brand.”