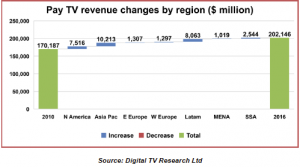 Global pay TV revenue growth slowed significantly last year, with North American revenues peaking in 2015 and emerging markets contributing much of the growth between 2010 and 2016, according to new research.

According to Digital TV Research’s Global Pay TV Revenue Databook, pay TV revenues across 138 countries increased by US$32 billion (€29 billion) between 2010-2016. However, pay TV revenue growth in 2016 amounted to only US$1.23 billion.

Digital TV Research principal analyst Simon Murray said that North American pay TV revenues, which grew by US$7.516 billion between 2012-2016, peaked in 2015 and actually declined by US$1.77 billion last year. 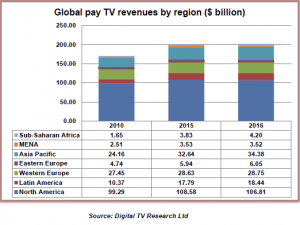 The US accounted for 49.5% global pay TV revenues in 2016; slipping below the halfway point for the first time. The country’s share of the global total in 2010 was 54.5%, according to Digital TV Research’s numbers.

Half of the growth between 2010 was generated by the US, China, Brazil and India. Nine countries reported declines over the same period, mostly due to subscribers converting from standalone TV services to bundles with other products.

Overall, pay TV revenues more than doubled in 59 countries over the reported period.