Microsoft to launch 4K-enabled Xbox One X in November 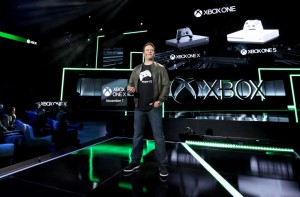 Phil Spencer, head of Xbox, unveils the Xbox One X at E3 in Los Angeles.

Microsoft has unveiled its forthcoming Xbox One X console and announced a November 7 release date for the device, which was formerly code-named ‘Project Scorpio’.

The Xbox One X will join the Xbox One family of devices, alongside the Xbox One and Xbox One S. It will launch in all Xbox One markets on November 7, and will retail in the US, UK and Europe for US$499, £449 and €499 respectively.

Microsoft unveiled the One X at the E3 videogames conference in Los Angeles alongside a line-up of 42 new games, and claimed the device is “the most powerful and smallest console Xbox has ever built.”

“Xbox One X was designed to be the best console to create and play games on, putting the greatest graphic fidelity in the hands of the world’s best game creators to create true 4K games,” said Microsoft in its launch announcement.

The console comes with an 8-core custom AMD CPU and a 6 Teraflop GPU, enabling 4K environments and characters “to become more realistic than ever” with more detail and smoother animations.