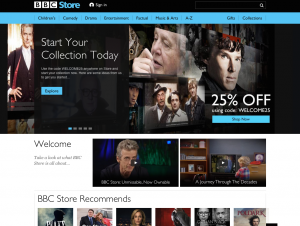 The BBC’s commercial arm, BBC Worldwide, is mulling whether to close down its transactional VOD service, BBC Store, just 18 months after its launch.

The Telegraph reported over the weekend that BBC Worldwide is poised to shut down Store after it failed to hit commercial targets.

A source with knowledge of the matter confirmed to DTVE that the service is currently under review by BBC Worldwide, with more news expected soon about its fate.

BBC Worldwide launched the download-to-own BBC Store in November 2015 promising access to the “most comprehensive collection of BBC programmes ever collected”.

The store initially launched with 7,000 hours of content organised by genre, series, and collections.

Its catalogue includes new programmes that have recently been on BBC TV or on the iPlayer, popular shows from past years and previously unavailable content from the BBC archive.

The UK service was a joint effort between the BBC’s commercial and public service arms and is accessible both through a standalone website, via iOS and Android apps, and on Chromecast.

Since its launch, BBC Worldwide has pursued other digital opportunities, most notably its recently launched Britbox service.

BBC Worldwide rolled out the US subscription VOD service in March in partnership with ITV, offering a ‘best of British’ streaming service for a US audience.