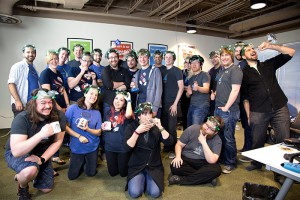 Founded in 2010, Owlchemy has created VR games including: Job Simulator, a launch title for HTC Vive, Oculus + Touch, and PlayStation VR; and Rick and Morty Virtual Rick-ality, a collaboration with Adult Swim Games.

Commenting on the acquisition, which was agreed for undisclosed terms, Relija Markovic, engineering director of VR and AR at Google said Owlchemy has “helped set a high bar for what engagement can be like in virtual worlds”.

“Together, we’ll be working to create engaging, immersive games and developing new interaction models across many different platforms to continue bringing the best VR experiences to life,” said Markovic.

Owlchemy CEO Alex Schwartz and CTO Devin Reimer said in a company blog post that, with Google’s backing, the firm will continue to “build awesome things”.

“We both believe that VR is the most accessible computing platform and that there’s a ton of work to be done, especially with regards to natural and intuitive interactions. Together with Google, with which we share an incredible overlap in vision, we’re free to pursue raw creation and sprint toward interesting problems in these early days of VR.”

Owlchemy Labs was founded in 2010 and as a company believes that interaction and using your hands is “what truly makes virtual reality the most incredible place to build unique content that blows players’ minds.”