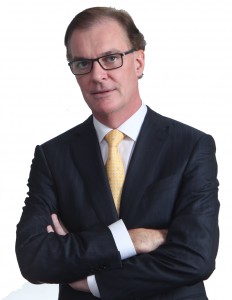 The UK TV model, which for 25 years has been based around the two broad pillars of pay and free-to-air, is now “fundamentally changing”, according to the CEO of Arqiva.

Speaking at the DTG Summit in London yesterday, Simon Beresford-Wylie, the head of the UK broadcast infrastructure firm, described a future that will increasingly centre on a hybrid delivery model.

“The new way, which we believe will become the main way that TV will be consumed, will consist of a compelling free-to-air base, complemented by a rich choice of IP services delivered over-the-top,” said Beresford-Wylie.

While he claimed that around 80% of TV viewing today is for live linear television – and that live TV’s cultural role should not be underestimated – he said that viewers’ “insatiable appetite for video content” now extends to broadcast, video-on-demand and subscription video-on-demand services.

“The coming together of the traditional free-to-air and over-the-top services raises an interesting question, we think, for the old TV model,” he said.

“Perhaps with the exception of premium sports, it’s not hard to imagine a future where many viewers’ needs will be met by a high-quality, universally-available, free-to-air service, augmented by a rich array of over-the-top services.”

“We think it’s quite telling that the DTT is used by these hybrid providers as the backbone to do the heavy lifting for the majority of viewing,” he said.

Summing up, Beresford-Wylie told conference attendees: “We’re convinced at Arqiva that the future will increasingly be about the hybrid delivery model, with DTT and IP co-existing and complementing each other.”

Arqiva is an independent provider of telecom towers, with around 8,000 active sites, and the UK’s national provider of terrestrial television and radio broadcasting.