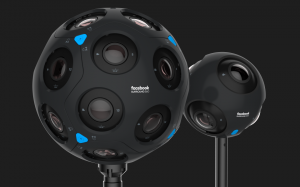 The x24 and its smaller counterpart, the x6, are the latest designs in the Facebook Surround 360 family. Facebook launched its initial Surround 360 camera last year.

The new cameras each have ‘six-degrees-of-freedom’ designs, which the social network said can create “some of the most immersive and engaging content ever shot for VR”.

“The new camera technology lets you move around within the video scene and experience the content from different viewing angles,” said Facebook in a blog post.

“This means you can move your head around in the world and see it from different angles — what’s known as six degrees of freedom, or 6DoF — bringing the feeling of immersion and depth to a whole new level.”

The news comes a day after Facebook lauched Facebook Spaces, a VR app that is designed to let users hang out in virtual environments “as if you were in the same room”.

Facebook also announced its new Camera Effects Platform, which is designed to giving developers the power to build AR tools.

“If you take one thing away from today, this is it: We are making the camera the first augmented reality platform,” said Facebook CEO Mark Zuckerberg in his F8 keynote.