Multiscreen TV operators continue to grow despite US reverses 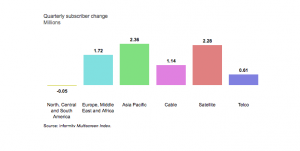 The world’s leading multiscreen TV service providers grew their subscriber bases by just under 1%, or 4.03 million new homes in the fourth quarter of 2016, with leading US operators posting losses of about 50,000 overall, according to Informitv’s Multiscreen Index.

The index, which measures the performance of 100 leading service providers worldwide, said that 61 of the companies it tracks reported net subscribers gains in the quarter, compared to 67 for the same period the previous year.

The Europe, Middle East and Africa region saw net gains of 1.72 million, with Sky adding 397,000 customers in Europe, including 170,000 in the UK and Ireland. Canal+, which continued to see losses in its domestic subscriber base – with 130,000 customers departing during the quarter – made big gains in Africa, adding 516,000 subscribers.

While the relatively small decline in subscribers in the US suggests that cord-cutting is still contained, the top 10 US operators did see more significant losses of 162,000 subscribers, partly compensated by gains elsewhere. AT&T’s IPTV service U-verse lost 262,000 customers, while its DTH and OTT unit, DirecTV, gained 235,000.

The Asia-Pacific region made the biggest gains, adding 2.36 million subscribers in the quarter.

“While the subscriber numbers for some services in the Americas are flat or falling, we are still seeing growth in other regions, with cable and satellite remaining robust worldwide,” said William Cooper, the editor of the Multiscreen Index.

“Eighty-eight of the 100 services offer some form of multiscreen access, now available to 90% of homes subscribing to services in the index,” said analyst Sue Farrell.

“The adoption of multiscreen viewing is much lower, although the next generation of online services is now aiming at a new generation of video viewers.”