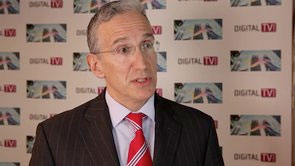 The cable industry thrives on scale, with consolidation beneficial for both the customer and the industry, according to Vodafone Germany’s chief commercial officer Manuel Cubero.

Speaking at Cable Congress yesterday, Cubero, who has also served as CEO of Kabel Deutschland since April 2014, said that Vodafone has had “fantastic experiences with consolidation” – though he would not comment on any future activity by Vodafone Group in this space.

In a broad sense he described mobile-fixed line convergence as “the newest thing” and said that the fact that thousands of cable operators still exist in Europe is something that is “a big thing that has to change, because we live from scale – among other things.”

Cubero said that Vodafone’s €7.7 billion 2013 takeover of Kabel Deutschland had allowed it to offer converged-fixed mobile services and “benefit from all the synergies and deploy more value to the customer”.

Asked whether Vodafone would take a similar approach to the French and Italian markets, he said: “I cannot comment on things that might happen, but we have evidence that it has worked. It’s really very clearly positive for everybody – for the customer and for the industry, especially for the customer.”

Taking up the same topic, the CEO of Liberty Global’s Central Europe Group, Eric Tveter, said that consolidation, in general, “is a continuing trend” – though he wouldn’t comment on the specifics of anything “in the pipeline or even possible” for Liberty.

Describing fixed-mobile convergence as “important”, Tveter said MVNO (mobile virtual network operator) deals work in some markets, while in others buying an operator might make sense if you have “enough footprint and enough scale.”

An example of the latter option, said Tveter, was Telenet’s €1.325 billion acquisition of mobile operator BASE in 2015. He said Liberty-owned Telenet has done a “great job” integrating a mobile business into its operations.

“We’re in the mobile business in a big way and I think consolidation could happen in mobile. Mike [Fries, Liberty Global CEO] spoke at the Mobile World Congress in Barcelona recently for the first time and we own, in Latin America, Cable & Wireless,” said Tveter.

“Mobile is certainly in our future,” he added “so we are offering mobile, either through an MNO (mobile network operator) or through an MVNO.”

Liberty Global completed the acquisition of Caribbean operator Cable & Wireless Communications last May, combining it with its existing LiLAC group to create what the company describes as the leading TV, broadband and telecoms firm in Latin America and the Caribbean.