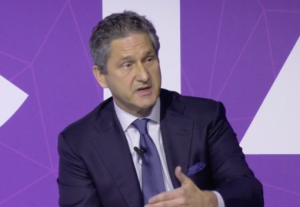 Realising the 5G vision in Europe will be extremely challenging because of the amount of money required to build the networks and supporting infrastructure, according to Liberty Global CEO Mike Fries.

Speaking at Mobile World Congress in Barcelona this week, Fries said: “The one thing that I think will prevent Europe from realising this 5G vision, which I think is compelling and exciting, is capital.”

Citing an estimate that it will take US$275 billion in investment to create a nationwide 5G infrastructure in the US, Fries said that regulatory and competitive considerations may prevent that investment being made in Europe.

In particular, Fries believes that a regulatory environment that prevents consolidation in mobile works against operators investing in next-generation networks.

“5G is not predestined. It needs massive investment which may not be forthcoming if the environment in which we operate doesn’t become healthier,” he said. “I mean, 129 operators vying for a share of declining revenue is a difficult place to be in.”

Fries said that Liberty Global had invested €20 billion in bringing fixed broadband up to speeds of 500Mbps. “In the fixed space two large infrastructure based competitors have worked in competition to drive consumer benefit. The same could happen in the mobile space if there were fewer competitors who had greater certainty of returns,” he said.

He said the US had got the mobile competitive environment right and there is a necessity for something similar to happen in Europe.

He said that regulation in the fixed business was working well in Europe, where speeds are higher than in the US. He said there is a need for something similar to happen in mobile. “There are too many mobile operators in Europe today.”

Fries said there is in any case still plenty of room for growth in 4G and that progress to next-generation mobile connectivity would be “evolutionary, not revolutionary”.

Fries said for Liberty Global, convergence between fixed and mobile is “about making customers happy” with seamless connectivity, unlimited data and one-stop billing.

Asked about Liberty’s relationship with Vodafone, Fries said that mergers and acquisitions were a “market by market decision” and declined to answer when questioned whether his company should merge with the mobile giant.

Addressing whether operators should invest in content, Fries reiterated his view that “there is no Disney or Time Warner in Europe” and said that content investments had to be looked at on a market-by-market basis with assets, including sports rights, that appeal to local customers.

Ansip emphasised the need for global convergence on 5G standards and stressed the need for EU coordinaton on spectrum, including what he described as the “economic conditions for spectrum use”, such as rapid and effective availability of new bands, predictable assignment procedures and licence durations and clear public interest requirements, easy trading, leasing and sharing.