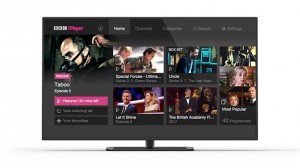 The BBC is rolling out new iPlayer personalisation features for connected TV viewers, in a bid to make it easier to move from device to device.

A new ‘Pin and Pair’ sign-in option on connected TVs will let iPlayer viewers twin their computer, tablet or smartphone to their main TV, meaning they can start watching content on the move and pick up where they left off when they get home.

The sign-in option will initially be available to viewers with YouView devices, but will roll out to other connected TV devices, including set-top boxes, streaming media devices and games consoles, in the coming weeks and months.

“Enabling sign-in on connected TVs and the rollout of new personalised features builds on the BBC’s strategy to make BBC iPlayer more personal across screens – letting you discover and enjoy programmes that are more relevant to you on the devices you use, whenever and wherever you use them,” said head of BBC iPlayer, Dan Taylor-Watt.

To sign-in viewers will be able to select a person icon on the top of the iPlayer screen on a connected TV. By going to the web address displayed on the TV from a different device and entering the code their device will be paired.

The BBC said that it intends to launch further personalisation features, including personalised recommendations, in “the near future”.

This comes after BBC director general, Tony Hall, said in January that the corporation must “reinvent public service broadcasting” in a bid to take on digital video giants like Amazon and Netflix.

In a speech to BBC staff in Birmingham to mark the beginning of the BBC’s new 11-year charter period, Hall said that the BBC iPlayer must “make the leap from a catch-up service to a must-visit destination in its own right”.

To do this, he highlighted personalisation as a “major priority” and said the BBC aims to grow the number of users who sign-in to the iPlayer from around three million today to 20 million “as quickly as possible”.

Separately the BBC said on Friday that the iPlayer experienced a “record-breaking month” in January, with 304 million programme requests – its highest ever.

The BBC’s January iPlayer traffic marked an 8% increase on December’s programme requests – the BBC’s previous biggest month. It was also up by more than 50 million requests compared to January 2016.