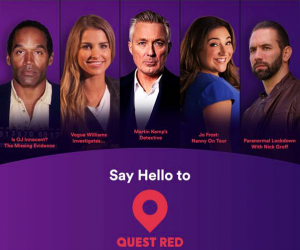 Discovery is launching Quest Red in the UK, its second free-to-air channel in the territory.

Billed as ‘the home of irresistibly real TV’ the female-skewing channel will sit alongside Discovery’s existing free TV channel in the UK, Salvage Hunters channel Quest.

Discovery CEO David Zaslav gave notice of the UK launch earlier this week and the name and further details came out this morning.

It will roll out on March 15 on the Freeview, YouView, BT TV, Talk Talk and Virgin Media platforms. It will also be on Sky after the pay TV operator and Discovery resolved a bitter carriage dispute covering the UK and Germany.

In the wake of that reworked Sky deal, Zaslav has touted the greater range of opportunities available in the UK, Discovery’s biggest international market.

“Bright, welcoming and straight talking, Quest Red is ‘the home of irresistibly real TV’ and brings something entirely new to free-to-air television for a female skewing audience,” said Clare Laycock, VP, head of channels at Discovery Networks UK and Ireland.