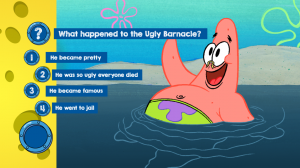 The app, SpongeMaster, will be available free on iOS and Android devices, and uses questions that appear live on air to quiz audiences, with prizes available for the top-scoring players. SpongeBob SquarePants episodes featuring SpongeMaster questions will air on the Nicktoons channel between February 13-24

SpongeMaster, the first play-along app unveiled by Nickelodeon UK & Ireland, was developed by Mars Interactive, a subsidiary of Ananey Communications Group, SpongeMaster has already launched in Israel and Hungary. The Nicktoons app marks the first time that an English-language version of the app has been available.

SpongeMaster games will take place every hour on the hour from 10:00-15:15 on weekdays. SpongeBob SquarePants questions will appear on air during the show’s live broadcast. Viewers have up to 25 seconds to answer through the app. Each game will last the length of one SpongeBob episode, with the top scores revealed on air immediately after the show.

“We know that kids love SpongeBob, their devices and gaming and we hope that families will take on the SpongeMaster challenge during this half-term.”