Discovery and Sky both claim victory as dispute is resolved 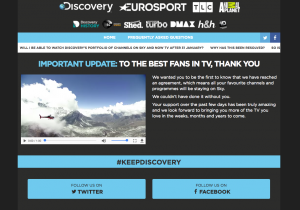 Discovery Communications’ channels will remain on the Sky platform in the UK and Germany after the pair reached a last-gasp deal in their carriage dispute.

Both sides claimed victory as a new deal was reached, with Discovery saying it secured improved terms for its 13-strong bouquet, and Sky saying that Discovery accepted the terms previously on the table.

As the sides reached agreement, the war of words between the pay TV platform and channel operator rumbled on.

Discovery had claimed Sky had not improved its terms for its channels since 2006, while Sky claimed Discovery was overvaluing underperforming channels and seeking almost £1 billion (US$1.26 billion).

With a deadline of 12pm GMT last night the pair announced a new deal with just over four hours to go.

“The deal we reached with Sky is meaningfully better than our former agreement and their proposal,” Discovery said. “Furthermore, our new arrangement enables us to control our destiny in more ways, with even more opportunities to invest and launch channels and consumer services.”

Sky UK and Ireland chief executive Stephen Van Rooyen said: “The deal has been concluded on the right terms after Discovery accepted the proposal we gave them over a week ago.”

He said Sky was pleased it would continue to carry the Discovery and Eurosport channels – without referencing any of the other nets in the Discovery offering in the UK.

In the same round of communications, Van Rooyen also noted it was adding 1,000 hours of on-demand factual content from History and National Geographic.

History is run by A+E Networks, which is run as a joint venture with Sky in the UK and much of Europe. National Geographic is owned by Fox, which is in the throes of taking control of Sky.

Sky also said it is adding a raft of factual programming from US broadcaster PBS to its line-up.

Sky had criticised Discovery for running linear only nets, while Discovery had expressed frustration that it was the terms of its carriage deal that prevented it from exploiting its programming and channels beyond linear. It said the new deal gives it greater freedom in this respect.

The carriage of three Discovery nets in Germany was also under threat and also resolved last night.

In a similar statement to the one issued by Sky in the UK, Elke Walthelm, executive VP, programming at Sky Deutschland said: “We are delighted that Discovery Channel, Eurosport 1 HD, Eurosport 2 HD and Eurosport 360 HD will continue to be available to Sky in Germany and Austria in the future.

“The agreement has been closed after Discovery has accepted our proposal, which we submitted to you unchanged over a week ago.”