Cord-cutting on the rise in the US 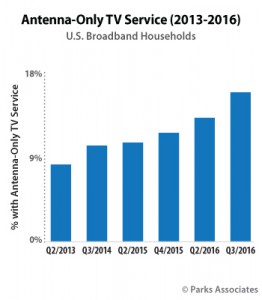 Cord cutting in the US has increased steadily in recent years with 15% of broadband households now only using their antenna to receive TV, according to Parks Associates.

The research firm’s ‘360 View: Entertainment Services in US Broadband Households’ report claims that the increase in antenna-only TV viewing has coincided with a drop in pay TV subscriptions and an increase in Internet-only video subscriptions.

“Pay TV subscriptions have dropped each year since 2014, falling to 81% of US broadband households in Q3 2016,” said Brett Sappington, senior director of research, Parks Associates.

“Several factors have played a part in this decline, including growth in the OTT video market, increasing costs for pay TV services, and consumer awareness of available online alternatives.”

According to the research, twice as many subscribers downgraded their pay TV service than upgraded it in 2016 – at 12% and 6% respectively.

Parks also noted that the size of the ‘cord never’ segment is also slowly increasing, with only 2% of cord-nevers adopting pay TV in 2016, compared to 4% in 2015.