NBCU’s Hayu service launches on EE in the UK 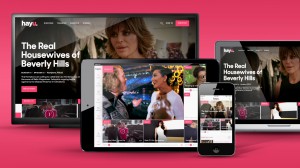 NBCUniversal International’s reality TV SVOD service, Hayu, has launched on the EE platform in the UK.

Hayu for EE TV is available now for new and existing customers, and the launch forms part of a wider expansion plan for the subscription video-on-demand service.

Speaking at the OTTtv World Summit in London last week, Hendrik McDermott, senior vice-president – branded on-demand, Hayu at NBCUniversal, said that the subscription service will also roll out as an app for Apple TV “in the coming weeks” following its recent release on Amazon’s rival Fire TV devices.

Offline mobile viewing will be added later this quarter, while work on HTML5 apps is also underway. Hayu will also launch physical gift cards in high street shops in December.

The Hayu app offers a catalogue of some 4,000 episodes of reality television – including shows like Keeping Up with The Kardashians, Made in Chelsea and The Real Housewives – with some 700 to 750 new episodes being added per-year.

The EE rollout expands Hayu’s operator footprint, with the service already available via Virgin Media’s TiVo platform in the UK and through Foxtel in Australia.