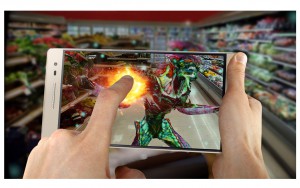 The first smartphone to support Google’s augmented reality (AR) initiative, Tango, has now launched in the US.

The Lenovo Phab 2 Pro uses Google’s Tango technology to enable AR gaming and utilities, with users able look through the phone’s screen to see objects and information overlaid onto the real world.

At launch Google said that 35+ Tango-enabled apps will be available to download from the Google Play store – ranging from an dragon-battling game called Slingshot Island to an app that lets you draw on the surfaces of your home named Crayola Color Blaster.

“Over the last few months, we have worked closely with app developers to create a wide variety of smartphone based augmented reality apps,” said Tango senior product manager, Justin Quimby.

“We see the potential for Tango technologies to be in every smartphone in the future. In the same way you wouldn’t consider buying a phone today without a camera or GPS, Tango will be a ubiquitous capability to help your phone better understand space and the world around you.”

Other Tango apps available on Google Play include virtual pets simulation Raise, astrological app Solar Simulator, car-track game Hot Wheel’s Track Builder and a number of apps that can help users to simulate how furniture and appliances will look in their home including WayfairView and Homestyler Interior Design.

Google has been working on Project Tango, rebranded simply to Tango in June, for the past three years – working to help devices understand physical space and motion in a similar way to people.

Lenovo announced it was developing the first consumer-ready smartphone for Project Tango at the Consumer Electronics Show in January.

The release of the Phab 2 Pro comes almost a month after Google unveiled its new Pixel smartphones – the first devices that are compatible with Google’s Daydream virtual reality platform.