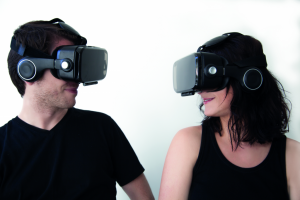 Orange is launching a mid-range universal virtual reality headset for the European market as part of its ongoing push into VR.

The Orange VR1 headset will be made available to consumers across a number of European markets including France, Spain, Belgium, Poland and Luxembourg, with other countries to follow.

Orange says that the headset is aimed at customers making their first steps into the VR world, and that it will be priced at about €49.99, including an Orange VR 360 discovery application that allows customers to use VR tutorials to ensure a quick and easy set-up, plus immediate access to 360 video content including a gaming experience, a sci-fi action clip and an educational video for Orange Cinema Séries customers.

The Orange VR headset will be compatible with both iOS and Android smartphones.
In addition to the content available via the Orange VR 360 discovery application, customers in France will also be able to access more content over the coming months with Orange VR Experience, which will feature premium VR videos, as well as the full OCS catalogue in a virtual environment.

The Strax-supplied headset is compatible with smartphones ranging in size from 4.7-6 inches. It comes with built-in headphones and provides a 120° field of view.

“We want to position Orange at the forefront of the VR revolution, creating new virtual experiences for our customers in an effortless manner,” commented Yves Maitre, Executive Vice President of the Connected Objects and Partnership team, Orange. “With the Orange VR1 headset, our ambition is to propose a device that makes VR accessible to our customers and in doing so, provides them with a user-friendly experience allowing them to enjoy VR content using their existing smartphone, whether iOS or Android.”