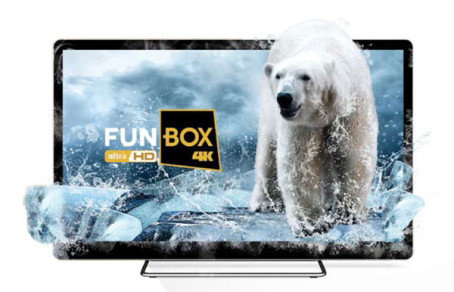 Thematic channel provider Filmbox/SPI International is extending its UHD TV offering by making its channel full-time, introducing HDR content and striking new carriage deals. The broadcaster is also changing the name of the channel to reflect the addition of HDR.

Speaking on a panel session on UHD TV at MIPCOM, Berk Uziyel, executive director of SPI/Filmbox International, said that the channel, which has now been on air for a year, would be extended from the current demo loop format to a full 24/7 channel within the next month and added that Filmbox would encrypt the channel next week with satellite operator Eutelsat’s help.

Uziyel said the channel was now a general entertainment channel with movies as well as TV shows and some sports content. He said carriage deals had been struck with Vodafone in Portugal, extending to Spain next week, with a Turkish launch to follow. “There are some delays with box rollouts but we are starting to work with box manufacturers as well,” he said.

Filmbox had also aligned with smart TV manufacturers, he said.

Funbox 4K, the current name of the channel, will change to Funbox UHD to reflect the addition of HDR content to the 4K content already being broadcast.

Uziyel said that “satellite is the most convenient way to deliver to platforms. In terms of DTH, some broadcasters will use hybrid solutions encrypting channels on air and mixing them with UHD channels.

Filmbox has also launched a Funbox 4K app. He said that Filmbox has encrypted content in a way that allows fast playback. The channel is already on Amazon Fire TV and will launch on smart TV platforms in the coming weeks.

Uziyel said that the trend towards UHD was a market-wide trend. “It is up to the operators to catch up with the installation of screens,” he said. “I think one third of our channels will be UHD in the coming years,” he added.

In contrast with some channel providers, Uziyel said that there is little point in blaming operators for the relatively slow rollout of UHD channels. It is important for broadcasters to get channels up on air to stimulate the market, he said, adding that operators are also wary of rolling out before standards are locked down. “We need to come up with creative business models. We can’t expect the operators to take on all the burden, and also take the blame,” if things go wrong, he said.

Speaking on the same panel at MIPCOM, UHD channel provider TERN’s CEO Rian Bester said that technology was one factor holding the industry back. He said that there are “only a handful of cameras that can be used for HDR. There are no action cams available that can shoot in 50fps,” he added.

Bester said that operators should also help out, for example by sacrificing SD channels to make space for the new format. He said that launching UHD services would help operators differentiate their offerings, adding that small-to-middle-sized operators were showing interest in deals.

“Where we are getting more interest is from the mid-tier of operators who are under pressure from all sides – from big pay TV players and from OTT services,” said Bester, adding that TERN was also adding HDR to its offering.

“We have commissioned four shows in HDR and two are in production already. We are continuing to raise the bar,” said Bester. He said “bandwidth and boxes” were still the biggest constraints. TERN has launched a smart TV app with Samsung available in Benelux to try a direct to consumer approach to bypass the need to deliver to set top boxes.

“We are trying to push the boundaries of making compelling television,” said Bester. The channel’s focus is on “inspirational people and incredible stories”, he said.

Kelly Holland, CEO of Penthouse Global Media, also on the MIPCOM panel, said that Penthouse had been the first adult content provider to launch HD services. It had followed up with a 3D launch. The broadcaster has been producing in UHD for six months and has about 100 hours of content, she said. However, the launch of a channel is held up by platform challenges, she added. “The natural solution is to go in for digital delivery,” she said. Penthouse is now looking at a digital launch in the first quarter of next year. However, the timing has been held up by the initial focus on getting onto pay TV packages.

She said that going OTT gave Penthouse the ability to launch both UHD and ultimately virtual reality. It also opened the door to making money from e-commerce, she said.

“The good news is that big platforms are investing in transponder space to get UHD channels on air,” she said. However, most of the channels on air are compilation services, which does not suit Penthouse’s approach. She said Penthouse could not wait for platforms to move first, particularly as adult channels would take second place to live sports services in pay TV operators’ priorities.

Holland said she also believed operators are weary of too many technology shifts, which add to costs without necessarily adding to revenues immediately.

“Traditionally, broadcasters have come to the [adult] genre first, but I don’t have the sense that is happening this time round,” she said.

Holland said that 3D had opened the gates to virtual reality and added that UHD would also be a “transit point” to something else.

Nela Pavlouskova, MD of The Museum Channel, which highlights art and museums in UHD, said her UHD feed would expand globally ultimately. She said the channel was producing only UHD and was down-converted to HD. The channel is moving towards longer formats. It is currently producing 60-minute documentaries and longer unscripted content.