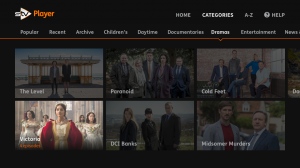 Freesat, the UK’s subscription free satellite TV service, has added STV Player from Scottish commercial broadcaster STV to its on-demand line up. Freesat viewers will be able to catch up on shows such as Taggart and Rebus as well as STV’s flagship programmes, including STV News at six and Scotland Tonight.

Available to Freesat viewers in Scotland from today and the rest of the UK on Thursday, STV Player offers catch up and live streaming access to programmes from ITV, including Coronation Street, The X Factor, and Victoria, as well as dramas from the STV archive.

Jennifer Elworthy, director of marketing and communications at Freesat, said: “We’re really pleased that Freesat viewers in Scotland can now enjoy STV Player through our On Demand service, giving them even more ways to watch the best programmes from STV.”

Remi Brunier, product owner at STV, said: “STV is committed to giving viewers access to first class programming, both live and On Demand. With STV Player available on Freesat, we can now offer our audience convenient online access to shows on catch up so they can watch their favourite TV whenever it suits them.”