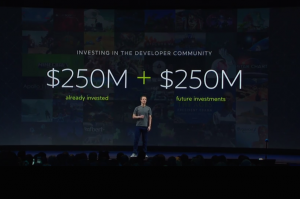 Facebook has pledged a further US$250 million to fund the creation virtual reality content including games and videos.

Speaking at the Oculus Connect 3 (OC3) conference in California yesterday, Facebook founder and CEO, Mark Zuckerberg said that with the new investment the social network is doubling its commitment to VR.

“I am proud to announce that we have already invested more than US$250 million into this community to fund the development of all kinds of content – from games to media and more,” said Zuckerberg.

“We’re excited to announce that we are committing another US$250 million to fund even more content development from folks in this community, so thank you for all the work that you’re doing – we’re really excited to support this.”

“I think that education is going to be a really powerful example of the potential of VR. Already today about 10% of the experiences in the Oculus Store are education,” said Zuckerberg.

Oculus, which was acquired by Facebook for US$2 billion in 2014, announced at OC3 that its Oculus Touch controllers will be available to pre-order on October 10 and will ship on December 6, priced at US$199.

It also unveiled a prototype for a standalone VR headset with “inside-out tracking”, dubbed Santa Cruz. The current generation of Oculus Rift headset works by being connected via a cable to a PC.

Among a string of other announcements, Oculus said it had made several additions to its Mobile SDK, making it easier for developers to bring their titles to Gear VR, and said users can also start a Facebook Live broadcast from any Gear VR app using the Universal Menu.

Now its third year, Oculus Connect is designed to bring the VR developer community together and this year hosted an estimated 3,000 people.