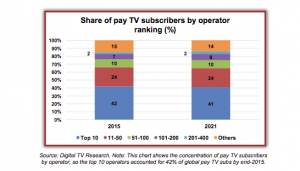 The world’s top 400 pay TV operators will increase their subscription count from 778 million in 2015 to 912 million by 2021, according to new research.

However, the Digital TV Research study claims that subscription and VOD revenues for these 400 operators will remain flat at US$206 billion.

“By end-2015, 12 operators had more than 10 million paying subscribers, and this will climb to 18 operators by 2021. However, the number of operators with more than five million subscribers will stay at 29,” said Simon Murray, principal analyst at Digital TV Research.

The research claims that the top 10 operators accounted for 42% of the world’s pay TV subscribers by the end of 2015 and predicts that this will remain roughly static at 41% in 2021.

Cable operator China Radio and TV and IPTV provider China Telecom were the world’s number one and two pay TV operators respectively by subscriber numbers in 2015 and are expected to remain so in 2021.

US operators Comcast and DirectTV are both expected to retain spots in the top five, though Charter is expected to drop out by 2021 as BesTV, another Chinese operator, moves into third place.