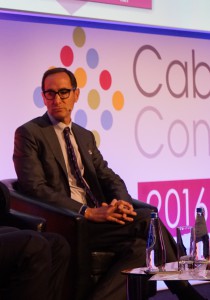 Netflix-type analysis of viewing data is not useful in helping content providers decide which projects to invest in, and could even harm the creative process, according to Josh Sapan, president and CEO of AMC Networks.

“Data and analytics are not particularly helpful. I think you’re more likely to trip and find the next big thing. It is more art than science. If you try and make it precise you will homogenise [everything] or make something that is not creatively intact,” said Sapan, interviewed on stage alongside Liberty Global president and CEO Mike Fries at Cable Congress this morning.

Sapan also said that AMC is looking “at vitrtual reality very carefully” and said that the format offered potentially untapped opportunities for drama. Putting creative people together with new technologies could create new experiences in ways that are not expected, he said

Sapan said that the cable video business had grown despite the arrival of Netflix. “There will be many more video options and they are competitive and disruptive to some degree. But I think it is an affirmation that people love stories,” he said.

Addressing the perceived threat presented to the traditional TV business by the media consumption habits of Millennials, Sapan said that young people watched TV everywhere as a matter of course, either live or on a delayed basis. Some even watched TV when it was scheduled because they didn’t want to miss out on social engagement around the shows they like, he said.

Sapan said that “people are voting with their chequebooks for experiences that are really compelling”.

Sapan said that AMC invested about US$1 billion in content annually and it was “imperative” it did this. “We were well aware we had to step up”, he said, when the network was launched internationally about 10 years ago.

Sapan said that that AMC is planning to go into production soon on The Terror, a supernatural drama about exploration of the North-West passage in the 19th Century, directed by Ridley Scott.